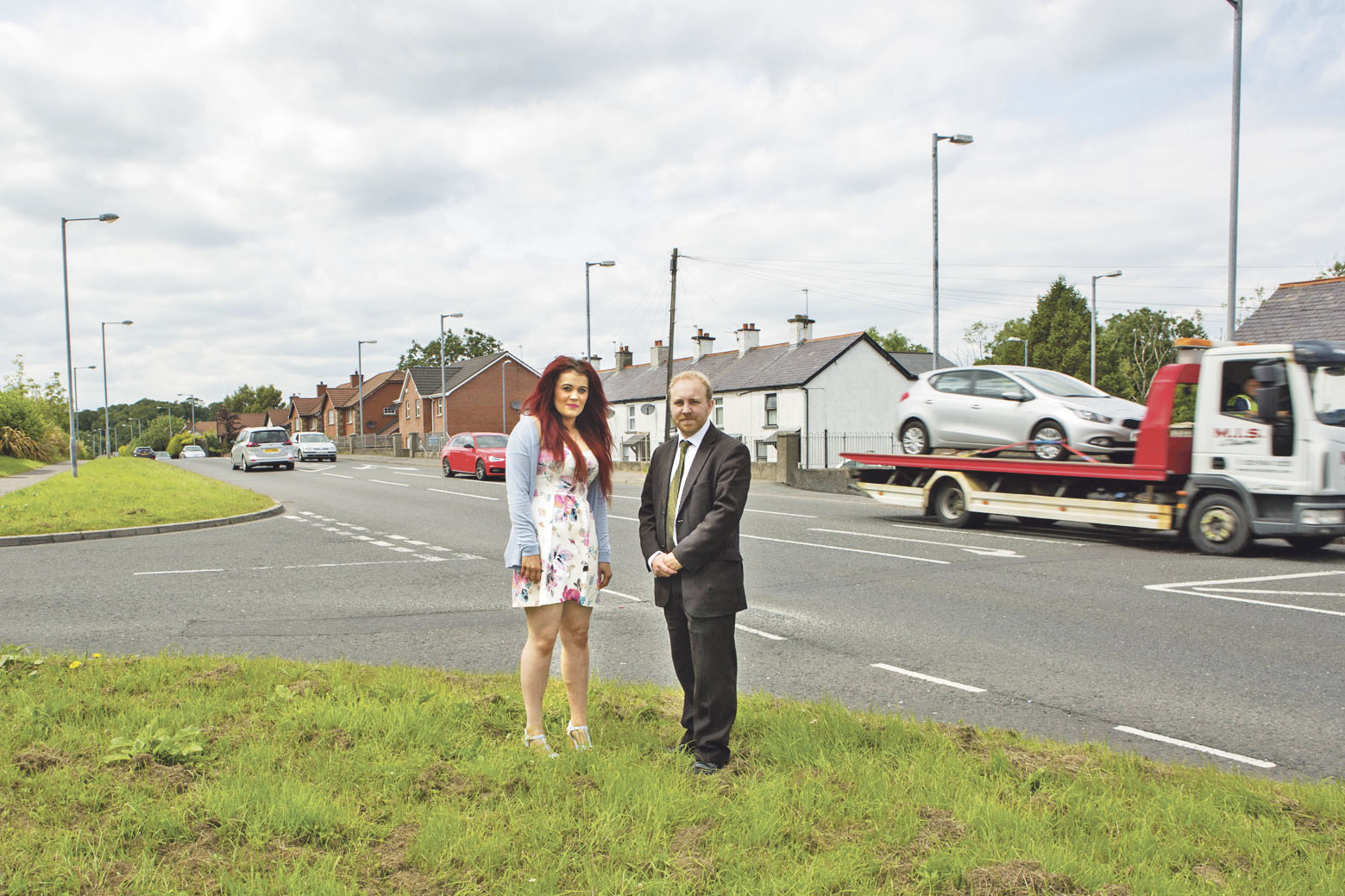 THIS IS the young Bangor woman who made a miracle recovery from the crash that almost crippled her on a deathtrap road.

But the government won’t even bother checking whether or not they might need to make the road safer, let alone actually do something about it.

Sarah Hendry was told she might never walk again after a horror smash on Rathgael Road last year.

The Fire Brigade had to cut her out of the wrecked car just yards from her home in the densely populated Lord Warden’s area of Bangor.

Now back on her feet after a gruelling nine-month recovery, she’s hoping to have some kind of traffic calming put in place before someone else is seriously hurt – or even killed.

But when MLA Steven Agnew tried to get roads officials to act, they wouldn’t even come out to have a look at the situation – because there haven’t been enough serious accidents.

Sarah lives in the large Lord Warden’s housing estate in the south of Bangor. A growing suburban area, it’s very popular with families and young professionals.

But there are only two roads in and out of the estate, and both of them have junctions with the busy Rathgael Road – which runs between two major arterial routes and is constantly busy with cars and lorries.

Last year Sarah went to drive out of Lord Warden’s Grange, hoping to cross one lane of traffic to turn right onto Rathgael Road.

“It was a Wednesday evening,” she remembers. “I’d been waiting for 15 minutes and couldn’t move out at all, it was so busy with traffic and no one was slowing down.

“Eventually what I thought was a safe enough gap opened up and I went to move out, but there’s a hidden dip in the road and a car coming from my right hit me side on.

“It was in a flash - the next thing I knew I was screaming in agony with the fire crew cutting me out of the car and ambulances all around.

“I was terrified, I remember saying to the paramedics ‘If I die here, tell my dad, sisters, brother and all my family that I love them’.”

Carried off to hospital, Sarah was told she had three fractures to her pelvis and lower spine.

“That night I was told I might never walk again, I was devastated,” she says. “I spent a month and a half in hospital, the first three weeks lying flat unable to move, followed by eight months of intensive treatment to learn how to walk again.”

She’s now determined to make sure no-one else suffers the same trauma she did, and is lending her voice to a campaign to get traffic lights installed near the Lord Warden’s estate.

“I’m aware of two accidents in the same spot since I had mine,” she says, “and those are just the ones I’ve heard about.

“Something needs to be done about this, if we don’t get traffic lights there will be more crashes and someone’s going to end up losing their life. It’s as simple as that.

“What happened to me is proof of how bad the road is, there shouldn’t be any more accidents here.”

Sarah has joined up with North Down MLA Steven Agnew in the battle to make Rathgael Road a safer place, and he says that it’s the one big pressing issue for the hundreds of families in the Lord Warden’s area.

“Having knocked doors in the area, this issue was raised by virtually every resident I spoke to,” he said. “It’s clearly a major problem for them, but as Sarah’s story highlights it’s also a major danger.”

Mr Agnew has already been in touch with the rebranded Roads Service, Transport NI, to ask them what can be done – but they told him there haven’t been enough serious accidents to warrant looking into it.

In correspondence seen by the Spectator, a Transport NI official states that traffic lights ‘would not receive a high priority’ because their record of car crashes in the area leads them to conclude that traffic calming measures aren’t really needed.

The official also claims that the Lord Warden’s estate is ‘typical of many residential developments entering busy distributor roads’ and says that instead of installing traffic lights it’s up to drivers to ‘adjust their times of travel to avoid peak traffic flow periods’.

That’s angered Mr Agnew, who is demanding that Transport NI at least come and check the area out instead of relying on their own records.

“I’ve asked them to come and assess the area, to visit so I can show them where the problem is and why so many people are having trouble,” he says, “but they’re not even willing to do that.

“I’m not an expert but traffic lights seem to make the most sense to me, if there is another method of calming the traffic here then all the better. But Transport NI won’t even come out because of their crash records – but in my opinion, what happened to Sarah is bad enough in and of itself to warrant something being done.

“I know people who live in this area, I drive around quite regularly and I know how difficult it is to get in and out. I know I have been at risk when trying to drive out of here, I’ve been lucky enough not to be in an accident but it’s only a matter of time until someone else is.”

The Spectator contacted Transport NI offering them the chance to comment on the issue.  A spokeswoman told us the area had been included in a review of outstanding traffic calming requests across the entire Ards and North Down council area that Transport NI carried out in March.

“Unfortunately this entire area remains a low priority for traffic calming measures in comparison to competing requests within the Ards and North Down Council area,” the spokeswoman said. “Requests will be kept on record and reviewed again when deciding future work.”