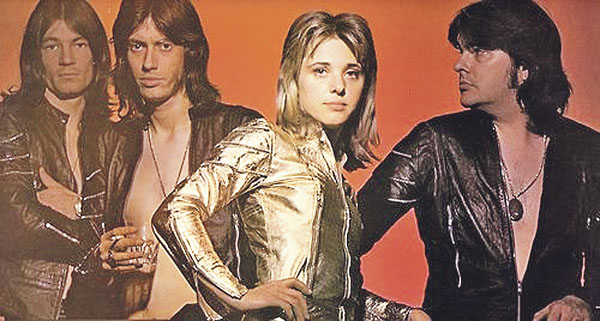 SELF-STYLED 1970s queen of rock ‘n’ roll Suzi Quatro is mourning the death, at 67, of a key member of her band from its heyday - veteran Bangor musician Alistair McKenzie.

Alistair played keyboards for the original Suzi Quatro Band and is credited with arranginging the memorable piano intro to one of their UK number one hits, ‘Devil Gate Drive’.

He toured the world, playing some of its most famous venues, like Madison Square Garden and the Sydney Opera House with Suzi and her band.

He was also a close friend to icons from the era like Alice Cooper and the stars from many of its legendary bands including Thin Lizzy, Slade and Kiss.

And he made countless appearances on Top Of The Pops, including the famous 1973 Christmas show, which has gone down in history as the definitive platform for the genre of leather clad rock at its best.

And Suzi Quatro herself has led the tributes to her former keyboard player, describing him as ‘a very talented, intelligent, nice human being’ whom she will miss desperately.

In a message left on her official fan club Facebook page last weekend, she said,  “Sad news to share. My original keyboard player, Alistair McKenzie, has passed away in Bangor.

“He was a true original with his Wurlitzer piano and will be sadly missed. I have so many good memories of this very talented, intelligent, nice human being. RIP my friend. Love you Suzi xx.”

In a second message she wrote, “Woke up this morning. Alistair McKenzie on my mind, as I suspect he will be for a while to come. RIP my friend. You were one of the good ones. xx”

Born in August 1947 in Glasgow, Alistair moved to Ballyholme, Bangor, with his family as an infant and attended Ballyholme Primary School,  Bangor Grammar and Queen’s University.

From there he went on to play piano and keyboards in a number of local bands, including The High Wall, before finding fame in London in the original Suzi Quatro band.

She had been signed to Mickie Most’s famous RAK record label after Most approached her for a recording contract upon seeing her on stage at a Detroit dance hall with the band Cradle in 1970.

Quatro was among a growing number of top of artists signed to RAK Records which included some of biggest names of their generation like Smokie and Hot Chocolate.

Hiring the songwriting production team of Nicky Chinn and Mike Chapman, RAK scored several British hits with Suzi Quatro, including Number One singles ‘Can the Can’ and ‘Devil Gate Drive’.

As a member of the band, Alistair shared in many of their dizzy heights, including their gold album awards and extensive repeat tours of the UK, Europe, Australia Japan and USA.

He toured with and struck up friendships with members of Thin Lizzy, Slade, Alice Cooper, Kiss and many other bands playing the world’s most famous venues.

Alistair remained with the band as its star continued to shine at its brightest, eventually leaving in 1976. He continued playing music for the rest of his life in London bands and laterly with the Bangor based Flange Band and Black Market Icons.

He had returned to his home town in the mid-1990s from where he went on to work in the Northern Ireland Civil Service.

His sudden and untimely death last week came as a terrible shock to his family, friends and many Suzi Quatro fans around the world.

He will be very sadly missed by his brother George, nephews Adrian and Alex and many others who have left messages of condolence on Suzi Quatro’s official Facebook Fan Page and other social media sites.

Close pal Roger Davidson told the Spectator, “Al was a wonderful, loving human being and a superb musician. Also he was a great friend to many people at his work, around the globe and especially in Bangor his home town, including myself.

“He was such a great guy and phenomenal musician. I was very proud to call him my friend and make music with him for many years. I think it’s important that people in Bangor and Northern Ireland remember his life. He was very much loved by many in this town.”

Alistair McKenzie’s funeral service and celebration of his life is expected to be held at Roselawn at noon this Saturday, July 4.