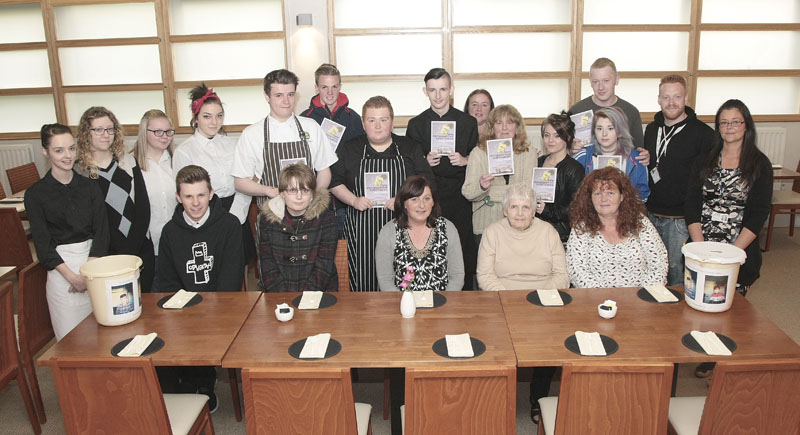 EVERY day is a battle, so that Adam’s death was not in vain, we have to keep pushing forward, raising awareness of the dangers of legal highs,”

These are the heartfelt words spoken by Adele Wallace, devoted mother of 17 year old Adam Owens who was found lying on grass outside a house in the West Winds estate, in Newtownards, on April 13.

Adam was taken to hospital by ambulance but was pronounced dead a short time later.

His heartbroken mother has blamed so called ‘legal highs’ for her young son’s death.

Speaking to the Spectator at the Bangor campus of SERC (South Eastern Regional College), Adele was clearly moved by the efforts of her son’s former classmates who had organised a fundraising breakfast in memory of Adam.

All funds raised from the tasty breakfast fundraiser held in the college’s Birches Restaurant will go towards providing a memorial for Adam at the Bangor campus.

All additional funds will be donated to the charity FASA (Forum for Action on Substance Abuse).

Students and staff alike as well as Adam’s close friends and family attended the fundraising breakfast on Tuesday (2nd) morning.

Michelle Graham, Skills for Your Life tutor, explained the inspiration behind holding the fundraising breakfast.

“The students wanted to do something in memory of Adam. So we came up with a few different ideas and the fundraising breakfast was the one they preferred.

The course tutor explained her students are a close-knit group who study literacy, numeracy and ICT, developing their skills and confidence for the future, enabling them to move on to further education or into employment.

She said, “The class are together all of the time, they are a very close group as there are only 10 students, Adam was such a popular boy and they wanted to do something in his memory.”

Plans are still to be finalised on the type of memorial for Adam but Michelle explained, “There is a little courtyard and we would like to plant a flower that would bloom around the time of Adam’s birthday, as well as having a memorial plaque.

“We are working with the horticultural department, so we have not decided 100%.”

The course tutor said her students were also keen to raise awareness about the dangers of legal highs also known as new psychoactive substances (NPS).

Adams mother Adele was full of praise for her son’s former classmates, saying, “I think it is amazing,

“I have been deeply touched that they want to get a memorial plaque for Adam, I think it is fantastic that the children and their tutor have all pulled together and made such a big effort.

“The youth of today can get such a negative reputation so it is good to see young adolescents can be mature and responsible and they are so caring and passionate.

“It has deeply, deeply touched my heart that they are doing this for Adam.”

The Bangor mum spoke openly about the difficult days since her son’s death saying, “Every day is a daily battle, so that Adam’s death was not in vain, we have to keep pushing foward, raising awareness of the dangers of legal highs, we have to put the word out there.”

‘Legal highs’ are substances which have been designed to mimic or copy the effects of illegal drugs such as cocaine, ecstasy, cannabis, LSD and benzodiazepines (benzos).

These legal highs can be sold as powder, crystals, pills, capsules, seeds and liquids and are nearly always in brightly coloured packaging with creative product brand names.

At the state opening of parliament the Queen outlined that the government plans to introduce new legislation that would ban anyone producing or supplying ‘legal highs’.

The complete ban on what are known as new psychoactive substances (NPS) would mean that selling newly created or newly used drugs which can cause effects in mood, perception or consciousness would be illegal, with a maximum penalty of seven years imprisonment.

Adele welcomed the government’s plan to crack down on the substances which claimed the life of her 17 year old son and pledged to carry on raising awareness about the dangers of these drugs.

She said, “A lot of parents don’t realise the dangers and parents need to be aware of the signs to look out for when their children are buying drugs.

“It can be quite difficult at the start when they (the young person) try to hide it. As time goes on their behaviour changes and they leave tell-tale signs.

“Legal highs are so dangerous and so easily available until the legislation comes through, so we need to get the word out there.”

Adele expressed her fears that more lives, like her young son Adam’s would be lost, before the proposed legislation became law.

She said, “The sad thing is there are going to be more Adams, that upsets me greatly. I wouldn’t want any parent to go through this, it has totally devastated my family in every way possible.”