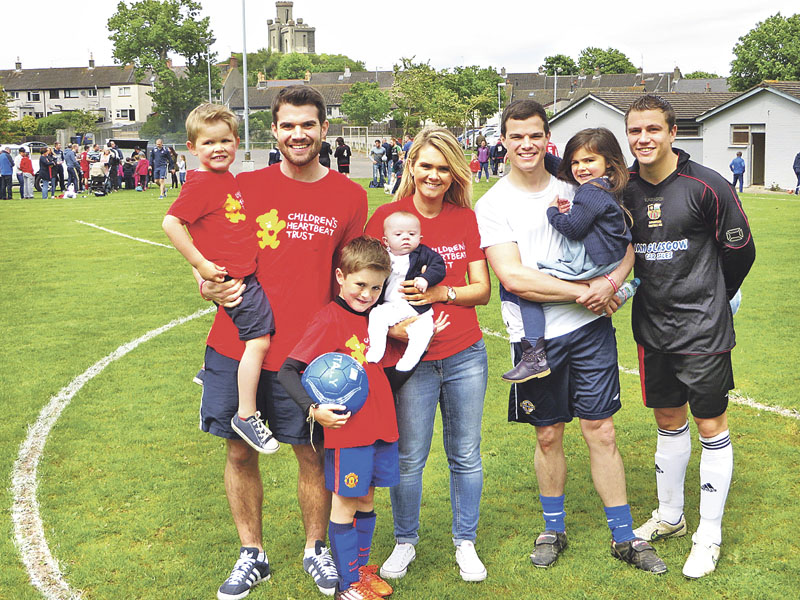 THE old saying ‘charity begins at home’ was perfectly demonstrated last Saturday as locals and close neighbours came out in their droves to show their support for a popular Donaghadee family and raise vital funds for a cause close to their heart through a charity football match.

Already proud parents to two young boys, the Strain family welcomed a new addition earlier this year with the adorable Ben – a beautiful boy who has endured health complications since birth when he was born with Down’s syndrome and Hirshsprungs Disease of the bowel.

Since that time, the local communities in Donaghadee and Millisle have rallied behind the family with messages of support, charity events and the power of social media has been clearly evident with the #TeamBen hash tag circulating regularly on Facebook as the family continue to receive overwhelming support from their local community.

Donaghadee has always been a town that looks after its own. The residents were only too happy to oblige when called upon to raise vital funds for the Children’s Heartbeat Trust – a charity which has proved a pillar of strength and support for the Strain family through this difficult period in their lives.

The charity founded in 1984 works closely with the Clark Clinic at the Royal Belfast Hospital for Sick Children, and provides support to families throughout Northern Ireland who have had to endure the trauma of a loved one experiencing heart problems and similar complications from birth to teen years.

Ben’s father Alan told the Spectator how Donaghadee Football Club got involved with the event. He said, “Craig, one of DFC’s local players, ask us if it would be okay to run an event for either us as a family or a charity of our choice.

He added, “Danielle, myself and family really can’t thank Craig and the club enough for all their hard work – they organised the event with the charity, got players involved, sorted out catering, and got T-shirts and wristbands for people to show off on the day for a charity that as a family we hold in the highest of.”

Members of the local community also got involved in the festival atmosphere through collecting for the charity at the match, providing food at no extra cost and selling ballot tickets to raise funds for the sterling work of the organisation.

The match itself was an open attacking affair with community pride at stake; a select Millisle outfit assembled to pit their footballing wits against their Dee hosts in a match that saw goals aplenty in a 3 – 3 thriller,  before the Dee men secured local bragging rights with a penalty shootout victory to send the locals home happy.

This day was not about the result however; the victory was a mere footnote on an afternoon that demonstrated everything good about human kindness and community spirit with everyone involved collecting £1,407.40 to aid the work of the Children’s Heartbeat Trust and support a local family to whom it means so much.

Craig Beazley, who helped organise the event shared the sentiments of the Strain family in saying, ‘a massive thanks to everyone who turned up to support today and a special mention to the local businesses who donated ballots for the event. It’s been a fantastic day’.

If anyone would like more information on this fantastic local charity and the work they do throughout Northern Ireland it can be found at www.childrensheartbeat