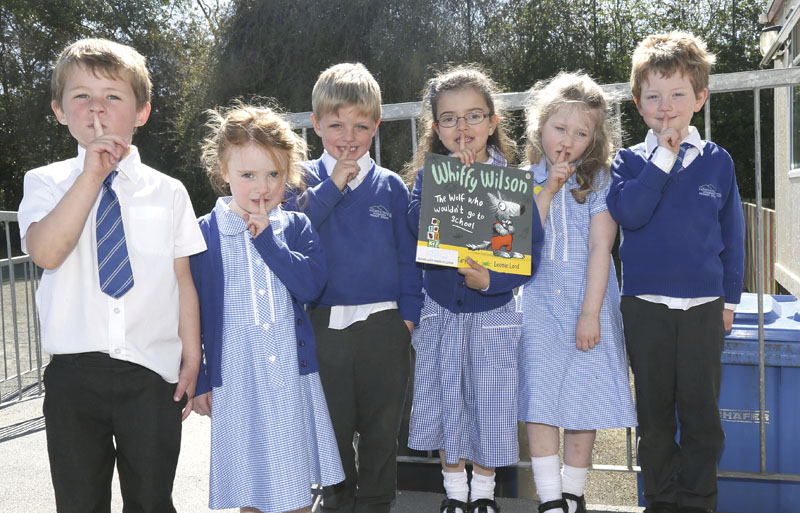 FROM the bright lights of New York City, to Cushendall boat club, Disneyland Paris and Connolly Street Station in Dublin! Adventurous Glencraig Integrated Primary School pupils have travelled round the globe thanks to an exciting new literary project.

Children from each class at the popular Holywood primary school have been ‘releasing books into the wild’ as part of their 2015 Book Week celebrations.

The Spectator was delighted to learn that these talented pupils are not only increasing their love or reading, but also encouraging children and parents across the world.

The enthusiastic children have embraced the scheme ‘releasing’ books in places such as the grand staircase at Belfast City Hall, to the far flung mall of the Emirates, in Dubai and the travel section of the local post office.

“My mum was in hospital a couple of years ago and I went to visit her. I was waiting for my dad outside the shop in the City Hospital when I happened to pick up a paperback that was on the seat beside me.

“When I flicked through it I saw that it was okay to take it with me as it had a sticker from a website called www.bookcrossing.com who encourage people to pass books on in this way and track their journey.

“I am the school’s literacy co-ordinator and I thought we could do this with the school.”

And what better time to release the books than during the school’s book week celebrations. Janine said, “Each class has £20 to spend at the book fair during Book Week and they had the chance to set these books free and ‘release them into the wild’.”

Janine said, “The books have a sticker which explains that the books are not ‘lost’ and to encourage the finder to get in touch with the school through the school website.”

Once the finders have finished reading their Glencraig Integrated PS book they are then encouraged to release the book back into the wild, so the book’s literary journey can continue.”

Janine explained some of the books would be staying closer to home. She said, “Each class will release a book locally within walking distance of the school, such as on the steps of the playgroup, outside Rockport, at the church door, in the phone box, on the post box and on a garden wall.”

However the teacher explained that thanks to some well travelled parents, some of the other books would be travelling much further afield.

Janine said, “About 25 books have been released worldwide. We wrote to the parents and asked if they could help release the books and we were delighted by the response.

“We have had books that were released in Connolly Station in Dublin and Time Square in New York - we were delighted when we received a photograph of a little girl who had picked up the book in New York and was reading it.

“Another book was released on the grand central staircase at Belfast City Hall.”

The school have been delighted by the enthusiasm it has generated amongst their pupils.

“The children have really enjoyed the scheme and got behind it.

“This year our aim was to show children that books can be enjoyed just as much as apps or their ipads, and this was just one of the things we did to show that.”