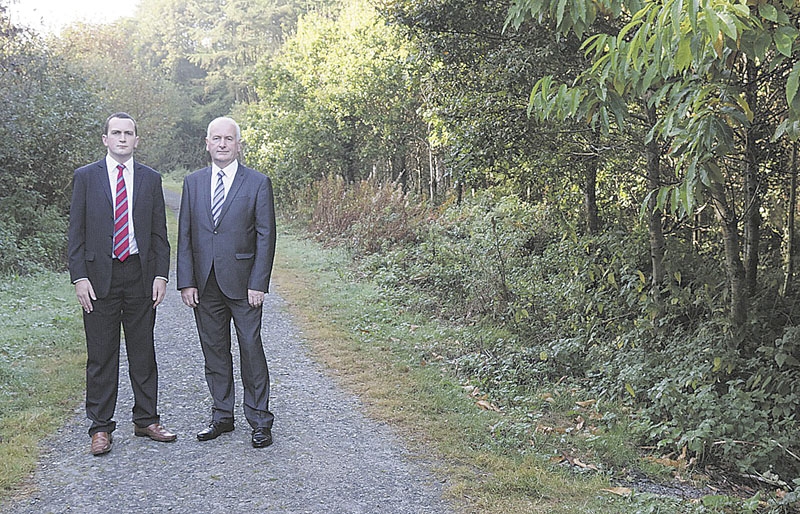 ALMOST 7,000 trees are to be chopped down in a ‘haven of serenity’ Cairn Wood.

Vast amounts of Ballysallagh Forest near Craigantlet are to be destroyed because of an outbreak of larch disease.

More than one-sixth of the 127-hectare forest, which takes in walkers’ paradise Cairn Wood as well as stretching around a nearby reservoir, will be cut down in an attempt to wipe out the disease.

Approximately 6,800 trees will be gone by the end of this month, which the government says is the only way to deal with the virulent outbreak of Phytophthora ramorum.

That’s the same disease that saw 6,500 trees cut down in Belvoir Forest over the summer and will result in the complete destruction of a Craigantlet wood just a few hundred metres away from Ballysallagh Forest.

Tree felling in Ballysallagh is due to begin in mid-October and will last for about a fortnight, Department of Agriculture officials told the Spectator this week.

Losing 6,800 trees will have a massive impact on the countryside, and particularly Cairn Wood.

The wood is massively popular with ramblers and is widely advertised as the perfect spot for a hillside walk in unspoiled countryside.

For example, tourism website Discover Northern Ireland describes Cairn Wood as ‘a haven of serenity with excellent views towards Bangor and far beyond’ that is ‘a prime location for rambling and orienteering’.

Meanwhile rambling site Walk NI says the area is ‘important locally not only for its conservation value but also as a landscape feature in North Down’.

North Down councillor Stephen Dunne visited the scene on Monday (29th) for what could wind up being his last look around the woods as they currently stand.

Speaking to the Spectator, he described Cairn Wood as ‘one of North Down’s finest natural assets’ and said he was ‘shocked and saddened’ by the coming chop.

“It is a real shame that larch trees within the Ballysallagh forest have been infected and unfortunately it now looks like there is no option but to fell larch and other symptomatic trees within the forest,” Mr Dunne said.

“I have been assured that the forest will remain open to the public as much as possible despite this disruption, and the Department of Agriculture have confirmed to me that it is not their ‘intention to clear-fell any of the broadleaf species in Cairn Wood’.

“I will be pressing [Ballysallagh owners] the Forest Service to ensure that the area will be replanted with similar species as soon as possible.

“Obviously this is a real blow to the local area and something it looks like we regrettably just have to endure.

“Cairn Wood is a place of relaxation and enjoyment for many dog walkers, hikers and casual walkers and very well used by young and old alike, it is vital that we do not see this valuable and precious local amenity destroyed.”

The Spectator contacted the Woodland Trust about the planned destruction, but on Tuesday morning (30th) the Northern Ireland director of the organisation told us the trust hadn’t been told the tree cull is on the cards.

“The Woodland Trust has not, as yet, been notified about the spread of Phytophthora ramorum into Cairn Wood,” Patrick Cregg said.

“The Trust recently commented on the presence of Phytophthora ramorum at the neighboring Craigantlet woodland. The disease’s ability to spread quickly is certainly a concern, and if it has indeed extended into Cairn Wood we can only reiterate that the removal of the host – in this case the larch trees – is the most effective way of tackling and reducing its spread.

3M to plough ahead with Bangor staff axe