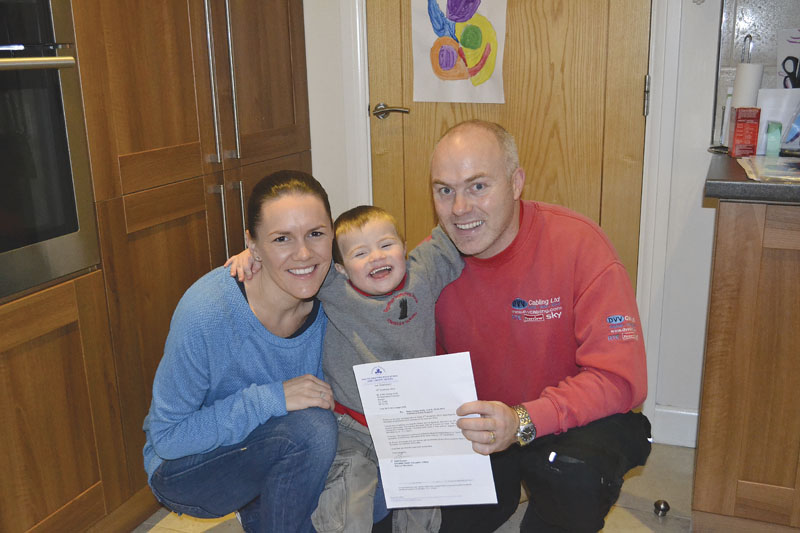 CHRISTMAS has come early for this brave boy who managed to get the axed school help he needs to thrive reinstated.

Little Riley Gedge-Duffy is a bubbly full of beans youngster who started pre-school at Bangor’s Towerview Primary School back in September.

But as the Spectator revealed in October, mere weeks after Riley began education bosses said they were going to axe more than half of the vital hours he spends with a classroom assistant.

His devastated charity campaigner parents were worried that the cut could not only leave Riley struggling, but that the resulting lack of supervision could even put him in danger.

They faced a drawn-out battle over several weeks to get those important hours reinstated – and they’ve now learned that they’ve at last won their fight.

Little Riley has Down’s Syndrome and over the course of his young life has already battled through a host of health problems, including being rushed to Dublin for emergency surgery while he was still just a baby.

And his big-hearted parents Aaron Duffy and Gillian Gedge-Duffy became charity campaigners after their beloved son got out of hospital, forming the Life Of Riley organisation.

The generous pair raised £10,000 for the Ronald McDonald House in Dublin, which provides accommodation and a supportive environment for families whose children are undergoing treatment at the city’s Our Lady’s Children’s Hospital.

There’s a room named after Riley in Ronald McDonald House now, a permanent testimony to Riley’s bravery and his family’s generosity.

When the brave lad started at school his parents knew he’d have some difficulties – Riley isn’t verbal and needs a lot of guidance to do fairly simple things his classmates would take for granted.

Because of his condition he has an official assessment, called a statement of special educational needs, that is meant to guarantee him the help he requires to get by in school.

For two months Riley had a classroom assistant working with him for 12.5 hours a week, and he was doing brilliantly as a result.

But at the end of October his devastated parents learned that help was to be slashed to just five hours per week – or only a single hour a day.

Aaron and Gillian resolved to head into battle with bosses at the South Eastern Education and Library Board, determined to win back the help their son needs.

Now they’ve found out that they’ve won, and to their delight Riley will have his 12.5 hours a week reinstated.

Delighted dad Aaron told the Spectator, “It’s great news, this is a real load off our minds in the run-up to Christmas.

“I suppose now the worry is that we’re going to have to go through this again – the statement can be reviewed every year, so we could have more hurdles placed before Riley. But we’re determined to overcome anything that might come his way.”