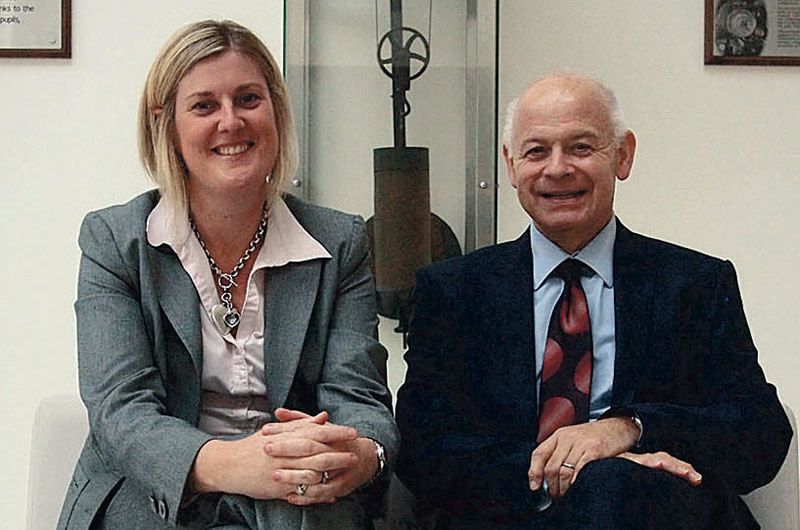 THE SPECTATOR would like to introduce the next person to take the reins at Bangor Grammar School – Elizabeth Huddleson. On Friday (28th) Mrs Huddleson was revealed at the grammar’s next principal, taking over from long-standing head Stephen Connolly when he retires at the end of this year.

Already vice-principal, when she becomes headmistress at the beginning of January she’ll be the first woman to sit in the hot seat in the 150-year history of the all-boys school. It’s certainly a time of great change at Bangor Grammar - within the space of a couple of a years they’ve bade farewell to their historic College Avenue location, moved into a new home and brand new building in the Gransha area of the town, and soon there will be a different face leading the school. The Spectator met with Mrs Huddleson on Tuesday (1st), and as she admitted her appointment as principal still hadn’t properly sunk in, even though it was now a few days after the official announcement.

“My initial reaction was that I was just so pleased the Board of Governors had such a faith and belief in my abilities,” she said, “but since I’ve been stunned by the response from the staff and pupils. “For example, when the headmaster announced it to the boys at Friday’s assembly I was genuinely amazed by the applause the announcement received and the length of that applause. It reaffirmed that this is absolutely the right place for me to be.”

Elizabeth became vice-principal of pastoral care five years ago, then sole vice-principal last year. She now hopes to bring those years of experience and knowledge of Bangor Grammar to bear as she takes the top spot. “The experience certainly helps,” she says. “It means that come January 3 I’ll be able to continue with the work we do here from the word go, though obviously I’ll have my own plans and areas I’ll want to further. “It should be beneficial for the boys and staff too - inevitably there’s a settling in period with a new head teacher, but when someone they already know takes over that should be minimised.”

Any new principal will want to shake things up a little, put their own stamp on the school they’re taking over. While it’s still a little early days to get a full action plan from Mrs Huddleson, she does want to work on getting rid of some public misconceptions about Bangor Grammar. “I’m not sure if people are aware of the value we add,” she explained. “Our aim is that by the time every one of our pupils leaves here, we’ve produced a responsible and well-rounded individual who will be able to function very well in university and the world of work.

“There is perhaps a belief that a Bangor Grammar pupil has to be sporty, in particular playing hockey or rugby. That’s really not the case, there’s something for everyone here – our debating teams keeping winning cups, we’re a top tennis school, our spring concerts are outstanding, we’re one of the top bridge schools in Ireland we develop whatever aspect of a child there is to develop. One of my main strategic aims is to get the word out about that, to communicate that side of Bangor Grammar a lot more.”

Mrs Huddleson takes over at a time when there’s a large and at times angry ongoing debate over the future of grammars in general. It’s no secret that successive Education Ministers have been opposed to the very existence of grammar schools, and after the abolition of the 11- plus a few years ago the entire sector struck out on its own to run replacement admission tests set up by the Association for Quality Education. Meanwhile the entire drive of the education system in Northern Ireland is increasingly towards sharing facilities with other schools in the area, with pupils taking subjects in different establishments – and there’s a continuing discussion over whether academic selection should even have a place in the 21st Century. But what does Mrs Huddleson think?

“I’ve worked in both grammar and secondary schools, so I can see the arguments from both sides,” she said, “but they do have a slightly different purpose in the current education system. “Grammars allow you to focus very strongly on the academic side, which is very helpful for GCSEs and A-Levels. However, as they currently stand GCSEs and A-Levels are neither accessible nor suitable for all children.”

She continues, “The problem with the debate over grammars at the minute is that it’s talking about removing one sector of the schools system while keeping the end result of GCSE and A-Level exams the same. “I think that’s the wrong way round, and there needs to be more joined up thinking about the whole picture of education from beginning to end. Before talking about removing sections within that picture. “As far the shift to sharing facilities goes, I very much welcome that. It’s a great step forwards on a number of levels, not least in that it allows pupils to access a much wider variety of courses and so a better development of skills for the workplace. Within North Down all of the schools are already working well together, we’re really at the forefront of this new collaborative method in this community.”

But with all of this change in the air combined with the radical overhaul of Bangor Grammar itself, the school would seem to be completely unrecognisable from the way it was even, say, three years ago. “Well, I can see how it might look like that on the surface, but really it’s only the building that’s different,” says Mrs Huddleson. “In terms of ethos and pupil development we’re exactly the same as we always were. “Mind you, the boys certainly love the new place. Wi-Fi just went live last week, the facilities are vastly improved and the buzz around our atrium every break and lunch is incredible.

Plus on a personal level I enjoy being able to walk into the staffroom and check out a rugby match through the window. “But although it’s a new building and a new principal, our aims of excellence, opportunity and community are exactly the same. Those three aims have always been at the centre of Bangor Grammar, they are what originally attracted me to the school five years ago and they continue to define us.”

Current headmaster Stephen Connolly will bid a fond farewell to Bangor Grammar School at Christmas. Having overseen a period of tremendous change in the school, he’s more than happy to leave the grammar in the capable hands of Elizabeth Huddleson. “I am delighted that Mrs Huddleson has been appointed as my successor,” he told the Spectator this week. “I have worked closely with her for five years and have come to admire her apparently inexhaustible capacity for hard work, grasp of detail, love for the school and ability to work harmoniously and productively with the boys and their parents. “She has a real feel for Bangor Grammar and is a popular appointment. I’m confident that she will lead it into a golden era of success.”