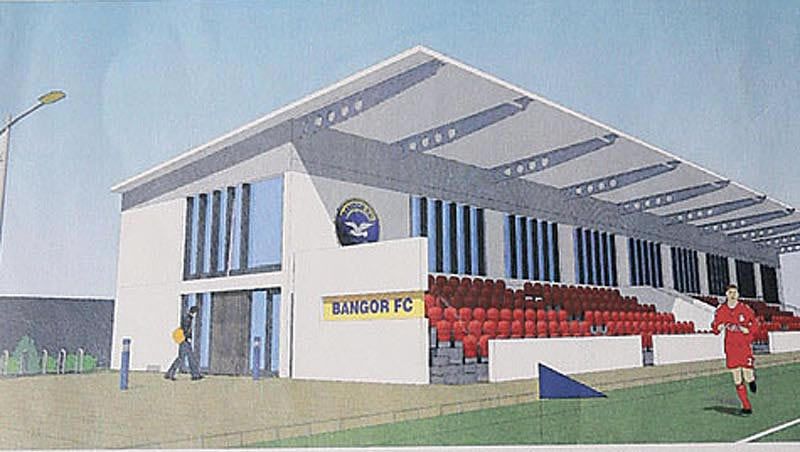 Bangor Football Club’s new synthetic pitch is on track to open in early October Throughout the summer work has been ongoing to refurbish and update Clandeboye Park, with a high spec 3G pitch as its centrepiece.

While there is still no sign of green just yet, the groundwork is almost complete, with new floodlights, costing £20,000, installed and new fencing being erected. The drainage work is also complete, with 18 drains installed across the pitch. Added to this, good work by the directors, led by Maurice Beattie, has led to the Clandeboye Park complex being given a general revamp. Furthermore, tarmacking of the ground is due to take place this week, and then it is onto installing the top quality pitch.

It is hoped all the work can be finished in time for Bangor’s home match against Lurgan Celtic on October 8. It has taken almost three years of hard work for the directors of Bangor FC to get to this stage. Although there is still work to do, they are obviously at the prospect of an upgraded Clandeboye Park. “There’s been no real development of this ground in the last 25 years,” said director Warnock Stewart. “We want to make this a stadium the town can be proud of,” he added. The project has been partly funded by Sport NI and the Ulster Community Investment Trust. “We’re very grateful to both parties for their support,” he said. He said the directors are also grateful to the support given to the club by North Down MLAs Alex Easton and Peter Weir.

The club hopes the new pitch will see a rise in the numbers of people using the Clandeboye Park facilities every week. The pitch, which will measure 99 metres by 63 metres, can be divided to suit five, seven or even nine a-side soccer. Managed by SportsZone (Ireland), this new leisure facility at Clandeboye Park can be rented by the public seven days a week. It can also be used for rugby and Gaelic training as well as other non-sporting events. Castle Juniors, Bangor Academy and Bangor Ladies have already confirmed they will use the facility as their base.

With Bangor and Premiership neighbours using Clandeboye Park as their home stadium, it is hoped that up to 1500 people might pass through the gates every week. “We anticipate in excess of 1000 people will use the pitch and come to matches,” said director Noel Thompson. While this phase of the work is almost complete, the directors don’t seem ready to sit back and rest on their laurels. Work has already started on looking at the possibility for a new stand, which will provide more facilities at Clandeboye Park.

More information about booking the pitch is available from www.sportszoneni.com or by emailing This email address is being protected from spambots. You need JavaScript enabled to view it. , telephone 07802 921041.

Read 266 times
« Football club has lots of bottle McIlroy - What is the answer? »

GAVIN WALKER
Well done Dr Farry. Great news for the Borough. Looking forward to attending my first performance in...
Curtain not falling on theatre...
14 hours ago
Ian
Match is now at home with a 3pm kick off
Replay on Saturday
about 3 days ago
GAVIN WALKER
Once again The Turnstones turn up magic! Good luck to all the cast. The Walkers will be there in for...
Snow White comes to Groomsport
about 4 days ago
Austen Lennon
A lovely man and a man that will be much missed in the Council chamber. My thoughts and sympathies t...
Shock death of councillor
about 1 month ago
Peter G Matthews
A very exciting game from start to finish with some great rugby being played by both teams. I felt B...
Fightback comes just too late
about 1 month ago
Russell Moore
He'll be very glad to get that first one in the bag after the last year! Here's to a better 2014!
Rory wins Australian Open
about 2 months ago