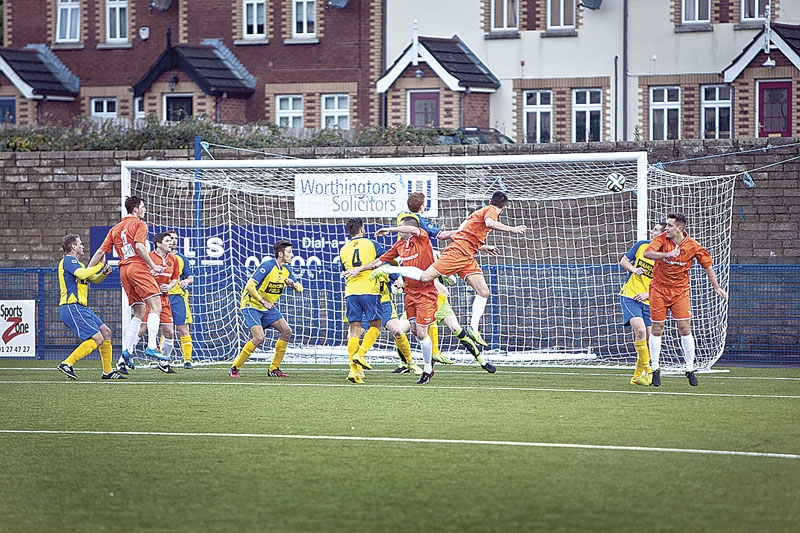 Both teams missed chances to clinch a valuable victory but, in the end, goals on the half hour by Jordan Forsythe for Bangor and Kyle Cherry for Carrick on 43 minutes were all either team could muster in a fast-paced match.

The result leaves Bangor still on top of Championship by seven points, although with a game in hand.

Garth Scates: “I thought we could have been comfortably in the lead at half-time but too often we were guilty of some sloppy passing. We came in at one goal each, and we should have been two or three goals up.

“In the second half, honours were probably fairly even. The game was there to be grabbed by the scruff of the neck, but neither team was able to do that. To look at the positive side, the last two times we have played Carrick they have beaten us by 3-0, so today was certainly an improvement.

“The players will have a free Saturday this week and I think that will be a welcome break and a much-needed one for some of them who are nursing niggling injuries. Then we face two very testing matches when we play Knockbreda away in the league on Saturday week and Crusaders in the Co Antrim Shield semi-final at Seaview three days later.”

Bangor have been drawn against holders Cliftonville in the Wasp Solutions League Cup semi-final. The match will take place at Solitude n Tuesday, December 16, with a 7.45pm kick-off.