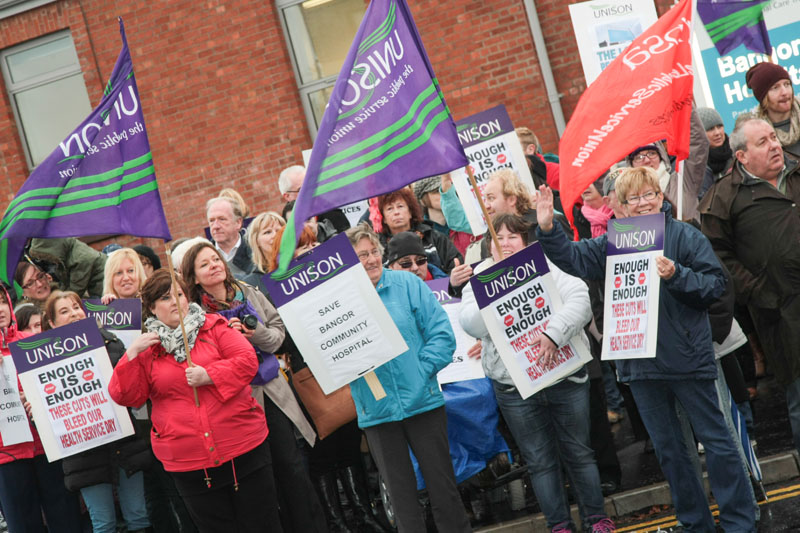 But the 20-bed GP inpatient ward at Bangor Community Hospital was axed as planned on Monday (1st), leaving local campaigners vowing to continue their fight and get that ward reopened.

Both the Minor Injuries Unit (MIU) and the GP ward were set for the chop by the cash-strapped South Eastern Health Trust, which needs to save £5m by the end of March.

Keeping the MIU means the Trust will have to find the £67,000 they would have saved from closing it somewhere else – but by shutting the GP ward they’ll save £207,000.

The trust has previously said any closures would be temporary, though campaigners have repeatedly voiced fears that wards would be lost for good.

Those same campaigners gathered a 15,000-strong petition against the closures, and it seems that their weeks of street protests were heard in the corridors of power.

Only four hours before Bangor Hospital’s MIU was due to shut down last Friday (28th) Health Minister Jim Wells announced that minor injuries would stay.

And his main reason for doing so was one of the central planks of hospital campaigners’ argument – that axing the MIU would put a huge amount of pressure on waiting times and resources at the Ulster Hospital’s A&E department.

“I am mindful that the winter months place greater demands on our emergency departments and acute hospitals,” the minister said.

“I have been considering carefully over recent days the activity levels of smaller hospitals and the assistance they offer the larger acute sites during busy periods.

“I have asked the South Eastern Trust to ensure the Minor Injuries Unit at Bangor Hospital remains open. This will lessen the numbers attending other units including the busy Ulster Hospital Emergency Department.

“Bangor Minor Injuries Unit deals with about 10,000 attendances annually and its closure would have offered up only minimal financial savings.”

Mr Wells added that the 20-bed GP ward would be kept ‘under constant review’, though he specified that reopening the ward was only ‘one option that could be considered’ if a sudden increase in the demand for beds happens.

“The South Eastern Trust has a range of intermediate care options available,” the minister said, “but clearly if additional capacity is required in the future, reinstating beds in Bangor is one option which could be considered.”

The MIU is now open from 9am to 5pm every weekday, but remains closed at weekends.

“The excellent campaign run by Unison members, other health workers and the general public in Bangor paid off and this reckless proposal was withdrawn,” she said.

“However the campaign is not over for Bangor and the decision to continue with the closure of the GP ward is equally reckless.

“The majority of those beds are a step-down facility from the Ulster Hospital. If the minister is serious about his intention to relieve the pressure on hospital A&E Departments then the retention of those crucial step-down beds in Bangor and elsewhere must be his next decision.

“Meanwhile Unison members across Northern Ireland will continue our campaign to save the NHS and this includes the preparations currently underway for industrial action across the service.”