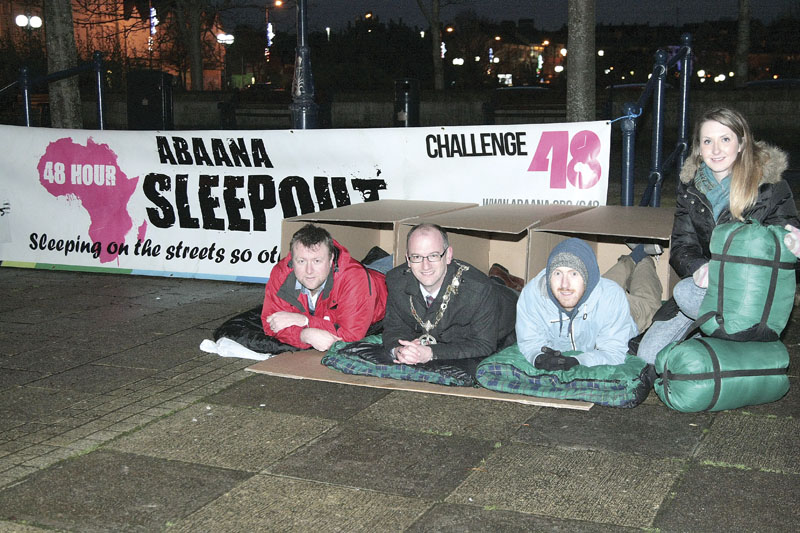 EVERY year in the UK we spend £594 million on unwanted Christmas gifts and on Boxing Day, an estimated 1.5 million of these will be listed for sale on eBay.

In contrast this Christmas there are one billion children living in extreme poverty, (less than 75p a day) who have never received a Christmas present.

Since 1998, Bangor-based charity Abaana has been trying to improve the lives of some of these children in Africa.

This weekend, a group of  40 volunteers (including The Mayor of North Down Peter Martin) will be sleeping on the streets of Bangor to raise funds for street children in Uganda. Volunteers will be sleeping out for between 24 and 48 hours from Dec 12 – 14 at the McKee Clock  Sunken Gardens at Bangor Seafront.

Like the children in Africa, the volunteers will be sleeping in cardboard boxes. During this time, they are not allowed to go into the homes of people they know, or to bring food, or any money. They can only be fed through kind donations of people or local shops.

Abaana is inviting anyone who wants to come down to the Sunken Gardens to show their support by either making a donation, bringing a cup of coffee or even just for a chat to learn more about the work.

The Mayor said, “It’s a small sacrifice to be sleeping rough in Bangor this weekend to support the great work which this Abaana does and also to highlight the issue of homelessness in Northern Ireland.

“Their work changes the lives of many who are indeed less fortunate than us and whilst we will only be facing this prospect for a weekend some face this challenge ever night. I’ve slept rough for charity a few times now but I never thought I’d be doing this as a Mayor.”