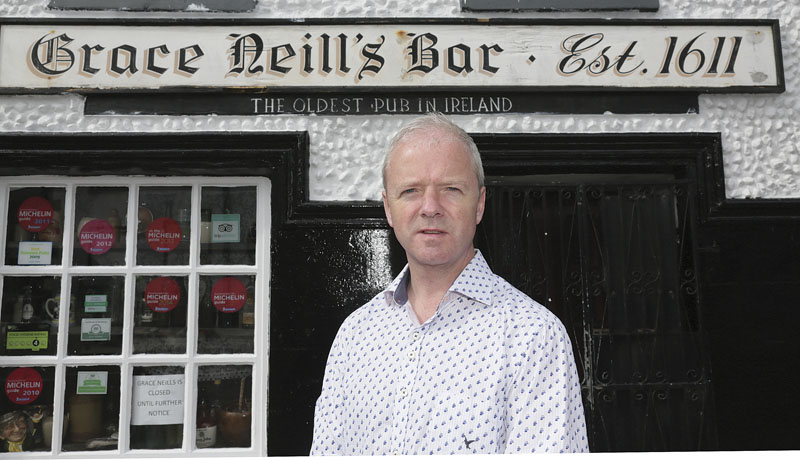 IRELAND’S oldest pub and Donaghadee landmark Grace Neill’s is set to reopen its doors at last.

The historic public house closed in April, but is set to fling its doors open once more tomorrow (Friday) at 3pm.

Grace Neill’s has been taken over by new management – restaurateur Paul O’Kane and his wife and business partner Mandy, the couple behind Groomsport’s Stables and Groomsport Inn.

And while the pair are still refurbishing the restaurant, the snug bar, the lounge and beer garden will serving regulars and newcomers alike from tomorrow afternoon.

A full weekend’s entertainment including live music on Friday, Saturday, Sunday and Monday is on the cards, while the newly redesigned bistro is on the menu to open in August.

“We are delighted to reopen Grace Neill’s for the people of Donaghadee and beyond and hope to buy these premises within the next two years” says Paul,

“We have also been very fortunate to keep some of the management and staff so there will be a few familiar faces around.

“I want to bring tourists back to the town - Grace Neill’s is a major tourist draw to Donaghadee and has been badly missed since its closure. It’s a fantastic place and we have dined in it many times over the years.”

Grace Neill’s was opened in 1611 as The King’s Arms but was renamed after its 19th Century landlady, who was bought the pub as a wedding present from her father.

Grace Neill ran the pub until her death at the age of 98 in1916, but her benign ghost is reputed to still make regular visits.