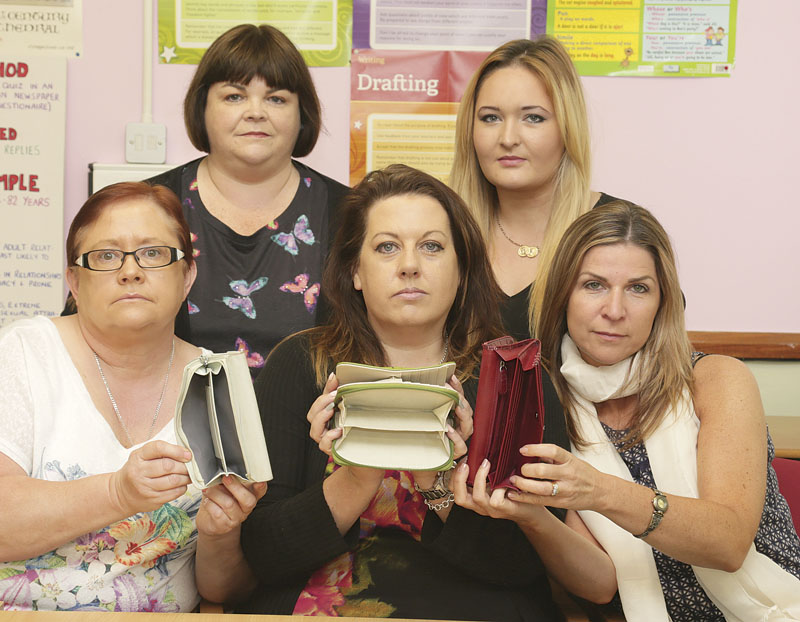 A VITAL service helping women back into work could close in just two weeks because of a government cash cock-up.

Kilcooley Women’s Centre in Bangor is currently under threat, centre heads told the Spectator, because the government hasn’t handed out tens of thousands of pounds the centre is owed in EU money.

Staff haven’t been paid for two months, they said, while student accreditations are at risk – and the whole centre could be forced to shut down within a fortnight if they don’t get the money they say they are owed.

“We’ve been promised some money might come through in autumn,” centre manager Alison Blayney told the Spectator on Tuesday (7th), “but my staff can’t eat promises, they can’t pay the mortgages on promises.

“We need some resolution on this within two weeks. If we don’t get it we could be looking at losing staff or even closing down, it’s that bad.”

The Women’s Centre say they’re owed around £75,000 from the European Social Fund (ESF), which gives money to organisations running courses helping people back into work.

The Department for Employment and Learning is responsible for handing out ESF cash in Northern Ireland – but some organisations from all across Northern Ireland haven’t had any ESF money in months.

Last week Employment and Learning Minister and North Down MLA Stephen Farry apologised for the ESF cash cock-up during a Stormont committee meeting, admitting that his department is solely responsible for the payment delays.

But as Alison Blayney points out, that apology won’t keep the lights on at Kilcooley Women’s Centre.

“My staff are at risk and that is purely down to the minister and the department,” she said. “It’s a complete cock-up on their part, it’s just incompetence.

“My staff work very hard day-in day-out for the community, but I can’t pay some of them because the department hasn’t distributed the ESF fund we’re owed. And that means staff have had to cancel holidays, they’ve had trouble paying mortgages – it has been a nightmare for them.

“It’s getting to the point where I could have to lay staff off but we can’t afford to lose people, it would mean closing the centre.”

According to Alison, this situation has been brewing for months but no one in the department, right up to the minister, has sorted it out.

“I’ve been trying to deal with this since January, the MLA Peter Weir and I have been lobbying the minister, but we’re still in this situation,” she said.

“Mr Farry has said it might get sorted out by late autumn – but even August would be too late for us, never mind October or November.”

And Alison added that this week she met with people from different community groups around Northern Ireland, all of whom are in the same boat over the department not getting ESF cash out – and they may all get together to launch a series of joint protests if they can’t get the situation sorted out quickly.

Speaking to the Spectator this week, DUP assemblyman Alex Easton said that the minister ‘has to get his act together’ and get the ESF cash distributed around Northern Ireland.

“I have been advised that the department owes Kilcooley Women’s Centre an eye watering £75,000 in back payments,” Mr Easton said, “and unless the minister pays this very soon the future of women’s training within the PUL community in North Down will be destroyed.

“Astonishingly Stephen Farry has admitted that it will take well into the autumn to sort the problem.

“I would remind Stephen Farry he carries a dual mandate, and whilst he currently holds a ministerial post he still has a duty of care to his constituency.

“If he can’t get his act together and the Kilcooley Women’s Centre has to close I will be holding the minister responsible and will call for his immediate resignation.”

The Spectator contacted the Department for Employment and Learning offering them the chance to comment on Mr Easton’s statement while informing them of the axe hanging over Kilcooley Women’s Centre and asking if there is any time frame for sorting out the issues around ESF payments.

A spokesman replied that the department ‘has no direct relationship with Kilcooley Women’s Centre’ – though it is a partner of the provincewide Training for Women Network (TWN), which is in turn a partner of the Kilcooley centre.

“Any outstanding funds due to Kilcooley from TWN have not yet been submitted to the department for payment,” said the spokesman.

“While the department has offered to loan staff to TWN to assist the organisation in putting its final claims together, that offer has not been taken up to date.

“In the specific case of the TWN, with which Kilcooley Women’s Centre is a partner organisation, the department has processed all claims for payment which it has received to date.”