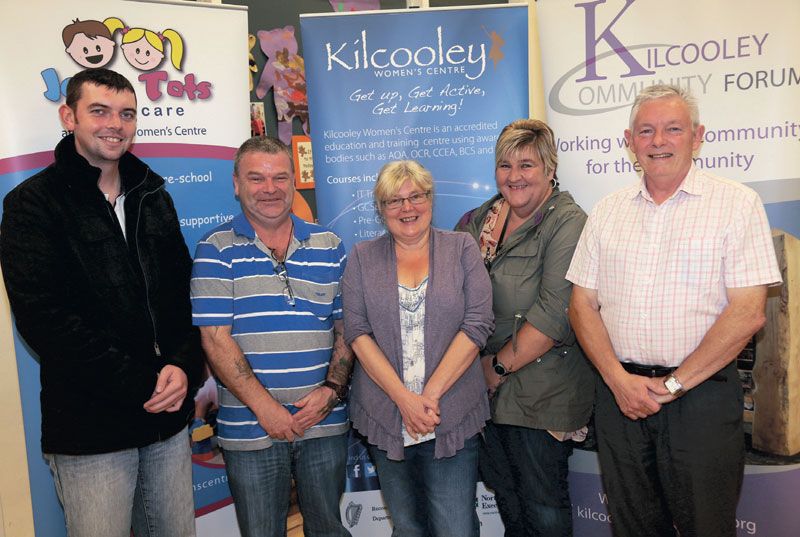 The return to education and gaining employment is a milestone achievement for many of these youngsters who are categorised as NEET (not in education, employment or training). Listening to their success stories were North Down MP Sylvia Hermon, North Down MLA Alex Easton and Councillor Wesley Irvine, amongst other community representatives. Ruth Griffin, who runs the START programme through the Bangor Alternatives project, told the meeting she was thrilled that young people were taking hold of these opportunities.

23 year old Michael Haden described his positive return to work after long term unemployment, after he gained essential skills including maths and English, through the START programme. After spending a number of years in the care system, Richard Mailey has been steadily working at the popular Kilcooley Allotments scheme for the past two years and has completed a number of courses through the START project. He encouraged other young people to turn their lives and ‘take the opportunities’ that the scheme offers.

Looking forward to the forum’s future Mark Gordon, Kilcooley community development manager, explained plans were in the pipeline to develop an overarching managing authority namely ‘Kilcooley Community Network’. He said, “This will allow professional people to sit on an advisory board who can assist us with some of the major projects in the pipeline and yet they would not be in a position to take away from the community ownership of any of our initiatives.” Two of the proposals, worth an estimated £ 7.5 million, include a multi-function centre and a 3G Pitch for Ganaway Field.

Mr Gordon said, “These projects will bring great investment to the community, including many employment opportunities. That is why START is so important, it is getting them on the first rung of the ladder, so they are best placed to get these jobs.” Mark welcomed the recent formation of the Bangor Inter Church Community Initiative (BICCI), which has seen over 30 churches come together to address the needs of the disadvantaged and marginalised in the town.

Regarding the closure of Ravara residential home, the community development manager said, “Ravara was closed and the residents, all in agreement, were re-housed while we wait for the demolition of the old complex and upwards of 24 new supported living dwellings for elderly, frail and those with early onset dementia to go on site. “This will ensure elderly care services in Kilcooley for the next 30 years. It is also a plan in the pipeline for Kilcooley Community Forum to create another new business to provide domiciliary care services within the immediate locality.”

Turning to the Kilcooley Allotments project, Mark said, “We have now opened phase two which houses poly tunnels and a healthy living centre providing tutorials, workshops and horticultural programmes. “We want this to develop and hopefully provide a Kilcooley vegetable market with a small business enterprise developed to sell Kilcooley produce.” He said, “These are just some of the visions, ideals and current projects we are developing but they need the support of the community and the help of other individuals.”

Concluding his speech, Mark highlighted the fact the forum had withdrawn support from the PSNI in a number of areas including the KEEPSAFE (Kilcooley Education Enforcement Programme Substance Awareness For Everyone). He said this was due to the ‘negative way the PSNI have treated members of the forum’. Mark said, “To date there is no contact with the PSNI other than with the community beat officer and we do not believe the responsibility to build relationships again rests with the forum.”

The election of office bearers included Cecil Wilson as chairman, Olive Kennedy as vicechairperson, Joanie Brown as treasurer and Diane Browning as secretary. North Down MP Sylvia Hermon said, “I’m a huge fan of AGMs and regard them as very useful, because the reports presented give a summary of the previous year’s work and also give an outline of projects for the year ahead. With so much having happened within Kilcooley Forum during the last 12 months and so much more work planned for the next 12 months, I must admit I was both surprised and disappointed that so few people attended its AGM.”

She said, “The low turnout did not, however, dampen spirits nor did it detract from the excellent presentations made be several young people, who had clearly benefited from the START programme. Each of them had an inspirational story to tell about the improvements in their lives, and their contribution to the AGM was undoubtedly the highlight of the evening for me.” Lady Hermon said, “By comparison, what concerned me most at the meeting was the reported breakdown in the good working relationships with the police. “That should not be allowed to continue and, as I indicated at the meeting, I am ready and willing to help mend the unacceptable rift with the PSNI.”