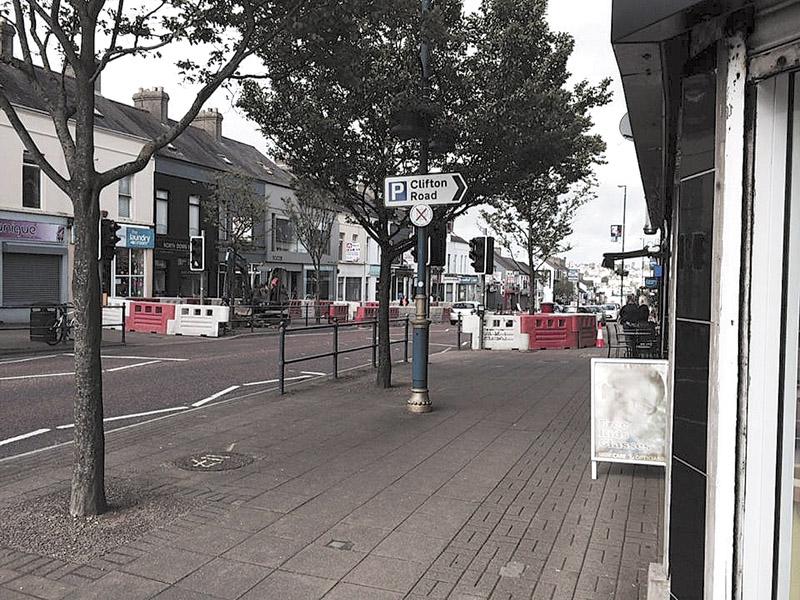 Traders have been crying out for action, complaining that they’re losing up to 50% of their takings as the public realm and several different utility companies all dig up the town at the same time.

A Save Our Shops campaign saw business leaders protesting on the steps of the Town Hall and eventually resulted in negotiations between Bangor’s Chamber of Commerce and people representing North Down Borough Council, contractors and consultants.

After three weeks the chamber say they’ve won some concessions on the public realm and surrounding works, including the appointment of a single person who can take the reins of all the work in the town centre.

That’s sure to come as a real relief to traders – a regular complaint was that as the various different bodies trying to dig the town up simultaneously all had different contractors and consultants, traders could be bounced between up to 20 different people when trying to get their problems dealt with.

But in a report seen by the Spectator the Chamber of Commerce now say they’ve been promised a dedicated project manager will ‘co-ordinate the Public Realm Contractors and the Utilities’.

Meanwhile North Down Borough Council will appoint a ‘dedicated council project administrator to keep a register of all issues and their timescales to resolution’.
The Chamber say they’ve also secured:

• better signs pointing out car parks and their various charges

• the formation of a town centre revitalisation committee

• moderation of building works outside businesses in the pre-Christmas period

The latter was a big issue for many local traders. Recently public realm contractors told business owners in Market Street and Central Avenue that they would be working on those streets over December – but the business owners complained that would devastate them financially.

Traders said they’d been given the impression the public realm work would down tools altogether in the run-up to Christmas, not just move from major streets onto side streets.

But now the Market Street work has been postponed to June next year, while Central Avenue will only have a small amount of work on one side with the rest of the work put back until January.

The chamber say there are still several outstanding issues, however, and state while relationships with NIE are improving other utility companies ‘are not coming on board’.

The report states that, “The chamber would like to see as much force as the council can bring to bear on these companies including using the regulatory framework and as much political pressure as possible.

“This is a very real concern with the 1,400th anniversary of St Columbanus’ death coming up next year. It is imperative that this area is fully completed at this time, again Northern Ireland Water seem to be delaying here.

“We will be writing to the regulator making complaints as well as the directors of the companies in question.”

The report adds that the Department for Regional Development still won’t give a committed timeframe for putting new lampposts in place, which means the chamber is finding it difficult to ‘communicate a clear endgame for traders’.

As a result the chamber says it is still important for business owners to keep an eye on the public realm and surrounding works to make sure that they’re moving on time and promises are being kept.