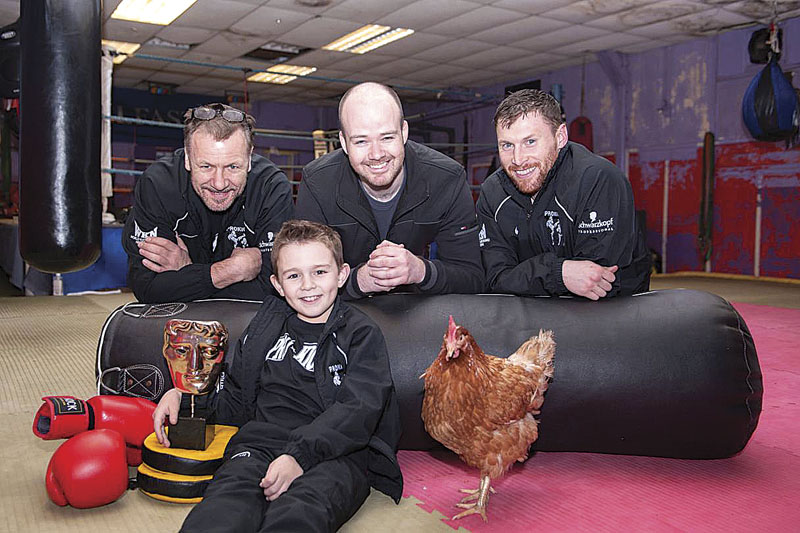 BANGOR’S BAFTA champ Riley Hamilton is due to make his red carpet debut at the biggest night of the showbiz calendar this weekend – the Oscars.

The star of Northern Ireland’s BAFTA-winning movie Boogaloo And Graham, nine-year-old Riley, is jetting off to Los Angeles to mingle with the A-listers at the 87th Academy Awards this Sunday (22nd).

Not bad considering that the first time Riley had ever tried acting in any capacity was when cameras starting rolling for the Belfast-set film.

Boogaloo And Graham is up for Best Short Film at the Oscars, having already won plaudits at film festivals around the world in advance of its BAFTA victory.

It’s a comedy drama about two brothers in Troubles-torn 1970s Belfast learning to look after pet chickens they’ve been given by their dad.

But the boys find their happy world torn apart by the most terrible news their young minds can imagine – their mum’s having a baby.

And Riley had a happy reunion with both movie director and Boogaloo the chicken at the weekend, with the nine-year-old at last getting to see the BAFTA trophy he’d helped earn first hand.

The reunion happened at Belfast’s ProKick gym, which is where Riley was discovered by the director and is run by the Bangor boy’s granddad – kickboxing champ Billy Murray.

And Michael says winning an Oscar would be a great bonus for everyone connected with the film and great for the country.

Beaming with pride, Billy Murray paid tribute to his grandson, “I’m so pleased for young Riley, he has never acted before this and he came across so natural.

“I’d love for him to keep going in the film industry but he’s more interested in football and kickboxing at the minute - just the weekend he attained his blue belt at ProKick, the fourth level grade and three away from the top black belt.

“I would like to say a big thanks to everyone involved in Boogaloo And Graham, especially Michael Lennox who is a friend and a very talented film-maker. Let’s hope we bring the Oscar home with us!”

Riley and Michael both train at ProKick, but it was a chance encounter that led to the Bangor nine- year-old making his acting debut in the award-winning short.

The director had been hunting for his ideal cast when he spotted Riley, who at the time was in the middle of an argument with his mum, and realised that he’d found his perfect star right there and then.

Boogaloo And Graham has been doing the rounds of film festivals across the world, but it’s set to make its Northern Ireland big screen debut next month with showings at the Queen’s Film Theatre in Belfast.

The 14 minute film  will be shown on BBC1 Northern Ireland on Sunday at 10.30pm.