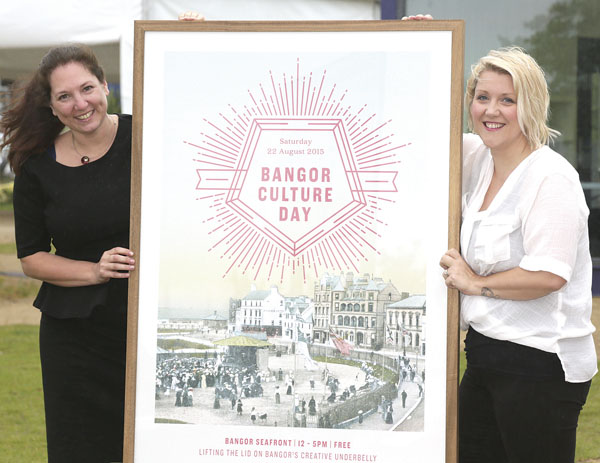 BANGOR’S very own carnival of culture is set for a return visit next month – and the organisers are calling on you to show your stuff.

On Saturday August 22 the town will be taken over by a five-hour free feast of creativity with the second ever Bangor Culture Day.

It follows on from last year’s pioneering event that brought hundreds of town’s creative types together in one place - not to mention thousands of people young and old checking out the centre of Bangor over the course of the day.

And the organisers are eager to hear from any of Bangor’s culture vultures who think they might be able to put on a show.

From free-runners to folkies, from poets to painters, from stand-ups to street dancers, all are welcome to pitch a performance to Culture Day co-ordinator Sharon Matchett.

“We want to speak to anyone out there, whether they are individuals or members of bands or community groups, who think they might be able to show off their creative spirit,” she told the Spectator this week as she took up residence in a special Culture Day Project 24 pod.

“That could be anything from musicians to magicians, or a poetry slam, or even a group of gymnasts or BMX riders – as long as they can stage a performance in the centre of Bangor, we want to hear about it. Anything goes.

“We will look at every single proposal that comes our way, and really the weirder the better. Any crazy idea you might have had, that outside of the box act you have been dying to show people, bring it to us.

“The whole point of Culture Day is to make people aware of and celebrate all the creativity we have in Bangor. A lot of great art, music, drama and comedy is being made here right now, all things that would be wonderfully entertaining, and we want to turn the town centre into the perfect stage to bring all of that to local residents.”

Family-friendly but not family-centric, last year’s Culture Day brought thousands of people to the centre of Bangor for huge free events taking in everything from open air tea dances to ukulele jam sessions and from day-long DJ marathons to intimate readings from local authors.

While the 2014 event sprawled in and around the town centre, this year Culture Day is much more tightly-focused on Queen’s Parade and the Sunken Gardens near McKee Clock – which were by far the most buzzing bits of last year.

“The first Culture Day was really successful, with more than 60 events stretching from the train station through the town and out along the pier,” explains Sharon, “but our aim for this year is take the best of last year and build on it.

“By concentrating on the Project 24 art pods through to Sunken Gardens area, it means more people will be able to catch more events – and that’s good news for the public as well as all the performers.”

One of the centrepieces of Culture Day is likely to be the hub marquee at Project 24, which will be transformed into a covered stage for a programme of acts – including a performance from the Open House Festival Choir, a group of strangers who have learned how to perform as a group over the course of just six weeks.

“The choir are fantastic, it’s a group of people coming together for one common goal and that’s very much the spirit of Culture Day,” says Sharon.

“August 22 will be the perfect opportunity to do something unusual. Get in touch and we’ll work it out, whether you have an idea to share or a talent to flaunt or simply want to lend a helping hand.

“The aim of the day is to involve Bangor people in a Bangor event – to show off the talent in this town and have pride in the town itself, and all for free over the course of five hours. It’s going to be quite the experience.”

Ards and North Down Borough Council have thrown their weight behind Culture Day, with arts officer Patricia Hamilton telling the Spectator it has all the ingredients for a hugely successful event.

“The council are thrilled to be supporting Open House Festival deliver the second Culture Day Bangor this August,” she says.

“The event will showcase the range, quality and talent of the artists living in this area, and it is set to be a memorable day for visitors to the town from Bangor and beyond.”

Anyone wanting to pitch an idea for Culture Day can contact Sharon Matchett by email on [email protected] or by dropping into her Project 24 pod.

Culture Day itself takes place on August 22 from noon to 5pm.